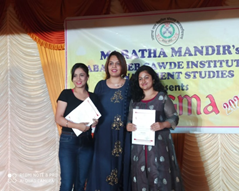 All these rounds were conducted with blend of songs as video round, dhun round,rapid fire and soon.

Runner up for Antakshari received 600 cash prize and winners were awarded cash price of 800 and both were awarded certificates as well for the event.

Runner up were Surabhi Vaze and Surabhi Sangore