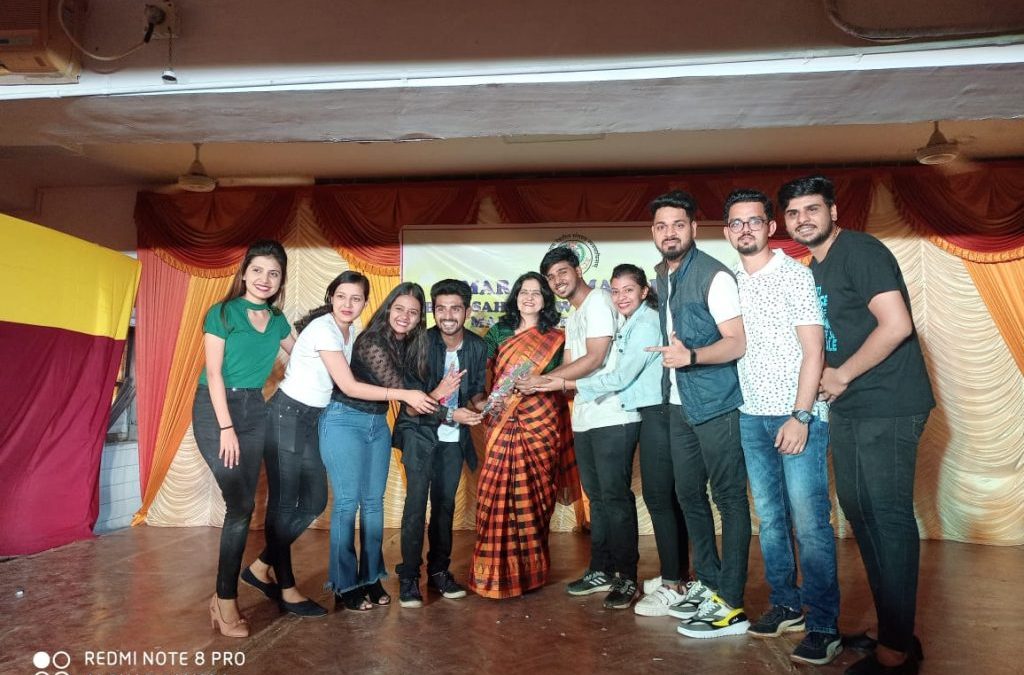 Maratha Mandir’s Babasaheb Gawde Institute of Management Studies celebrates “MAGMA 2020” event with pomp and splendour every year. This year also it was celebrated with fun, knowledge, creativity, innovation and freshness in all aspects of life. “MAGMA 2020” is an annual event with three days prolonged programmes which includes sports, antakshari, music ,dance, fashion show, pantomime and chorus. Its inception has always brought out the best talents in the institute. It is organized with much fanfare.

The event began with “Sports day”. Sports event was organized by Gymkhana Committee on 11th and 12th March 2020.  This included Rink Football, Tug of war, Box cricket. Each event was conducted separately for boys and Girls.

In each game like Rink Football (5 Boys and 2 Girls Team), Tug of war (6 Boys & 4 Girls Team), Box Cricket (8 Boys and 4 Girls team) teams participated. Sports event is conducted to imbibe the culture of co-operation, sportsmanship spirit and leadership among the students which was evident from the event. Winners and Runner up were from both first and second year of MMS.

After, finishing all sports activities on 12th March 2020, post noon “Antakshari competition” was held at 2.30 pm in Room No 206-207.Around 16 teams participated in the event. There were 3 rounds as under

All these rounds were conducted with blend of songs as video round, dhunround, rapid fire and soon.

On 13th March 2020, the day began with a graceful ceremony starting at 10.00 am with the lighting of lamp followed by Maratha Mandir’s Prayer at Jivajirao auditorium. The Programme witnessed an array of multi-cultural attires and items such as cultural dances, songs and fashion shows on various themes like Body Shaming, Drug Addiction- A Curse, – Violence- No More Tolerance (NIRBHAYA) and so on.  A brief speech was given by the anchors and Cultural Committee Head on the importance and essence of culture in the modern day.  The ceremony was attended by all the faculties and students. With the MAGMA 2020 Cultural day banner in the backdrop, the event was attended by our Honourable Secretary Ms. Sonam Nishandar, Director Dr.Chitra Gounder. This event was judged by Chief guest Smt. Vaishali Bhende who is a Visharad in Kathak from Gandharva Mahavidyalaya, our next Chief guest was Ms. Pooja Jambotkar who was former Miss Universe and fashionista.

The winners of the different competitions were awarded certificates by our Chief guests and Director Madame.

In the dance competition, second year student’s group Mr. Aakash Mahadik and Group won the first prize. Their theme was “Drug Addiction- A Curse”.  As they depicted of today’s world more youngsters are getting addicted to drugs. In order to create awareness about how getting addicted to the drugs can destroy your life. For that they had selected Song Raktacharitra.

Dance Runner up team Ms.Nikita Chavan and team had chosen the theme “Tribute to Indian Army”. Another hit performance by Second year students. Here, they showcased how our national heroes sacrificed themselves for the country, without caring about themselves just to keep all of us safe. So, through their dance performance team was appreciated for their work and sacrifices made.

For the fashion show, second year students Mr. Pankaj Kamble and team got First prize for the theme- “Violence- No More Tolerance (NIRBHAYA).” As responsible citizens students had chosen this theme to create the awareness that this kind of crime will be severely punished and will not be tolerated.

Fashion show runner up first year Mr. Omkar Kawle and team depicted “Monochrome”. The idea behind this theme was to bring into light the taboos that we come across regarding a person’s looks. The theme elaborates that looks can be deceptive and one should not be judged on its looks.

All the performances stole hearts of both respective judges and all participants. Thus the event came to close with laughter, merriment and joy of colours at the campus. A big round of applause for the coordinators who made this event a resounding success.